skip to main | skip to sidebar

Well Amigos, that's all she wrote for this year. I'm heading back east (and way south) to finish up school. They're will be plently of climbing going on in the coming weeks, especially as faces on the Ingrahm Trail continued to be developed by the YK Climbing Club.

If you haven't already, check out the YK Climbing Club Website (http://ykclimbingclub.com/). I have generously donated a crashpad to the club (I know, one step closer to sainthood) so drop them a line if you're looking to do some bouldering.

In conclusion, Yellowknife has a lot to offer in the way of climbing. The climbing is there, it just needs some deicated people to develop it! 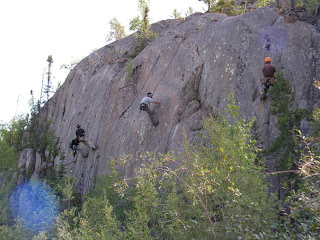 Hey Mom and Dad (I'm thinking only my folks read this blog...but someday some boulderers will stumble across the site and be inspired!!!) here's a couple of nice photos for you to enjoy. 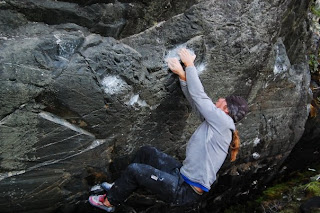 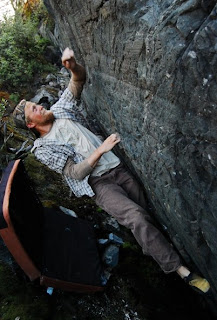 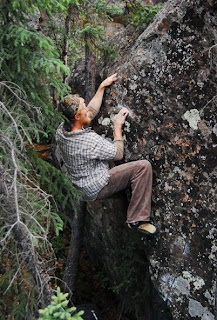 Went back to the lower teir yesterday and found some extremely hard lines. One of the lines that has sparked my interest is on an overhanging buldge that has some really cool rock texture. Further adding to the craziness of this line is the fact that it's propped up on a ledge that another meter of the ground. A serious attempt on this line will require some good spotters and more crashpads (or soiled mattresses, that can luckily be found in the area).

Start on the vertical rail, pop up to the the slopey ledge, and if you can get any purchase on the ledge, throw up to the slot (very slopey) and then ...? 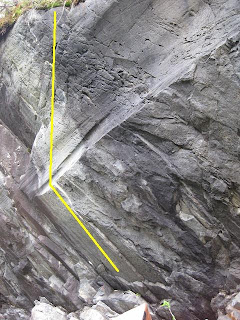 Posted by Pusher at 4:19 PM No comments:

Wow, it's been a while. I've finally ventured back to the ski-club this last weekend to do some more reconn, and climb some lines that I've scouted earlier. This time however I brought along a chum, who is what we in the industry like to call "a heavy puller". Mr. Ryan Fletcher came all the way from Quebec to get on this rock (well.....kind of); and I must say, he seemed thoroughly impressed. 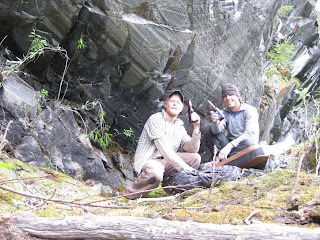 Hopefully I'll be able to update some better photos of the day (once Fletcher emails me them). But anywho, here are the two climbs, both located on the lowest tier. They are pretty much on the same face as "Hairy Back".

The first climb is called "Joint Effort", and no, no performance enhancing drugs were used. The name comes from the fact that I stole Ryan's beta on this climb to nab the FA. Yeah me! I've yet to get consensus from Ryan, but I think this climb goes at v6. 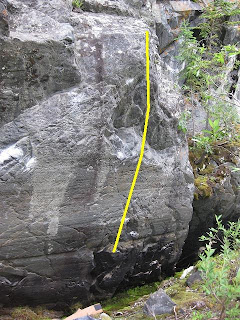 The next climb, which is also just as rad, and a slight bit harder is called "Macaroon Thief". The name comes from a pesky squirrel that was constantly rushing us, and eventually got into my box of delicious macaroons. I'd say this climb is about v6/V7. 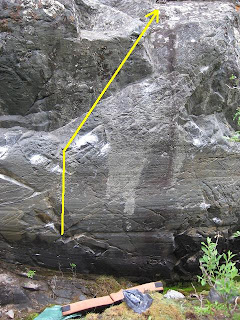 
Alrighty, stay tuned for some sweet photos..and possibly a couple of vids too!

Awesome day of climbing today. I checked out the lower tier, and surprise, most of the stuff was dry. The lines that I have been drooling over for the last few weeks were finally available for a few burns. Each of these climbs have taken a lot of cleaning time, as there is large quantities of moss and lichen. But the effort was worth it, and now I present "Le Nouveau Climbs".
This arete has taken a few days of work to put together. The slap from the face to the upper arete is a large move and takes a wee bit of energy. The top-out is also pretty tricky, and only
after I located a nice crimper at the top, was I able to put it together. Be careful on the top-out and the down climb. Three stars!!! 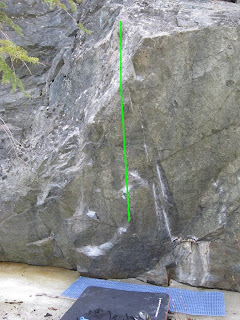 (Diamond Tooth Arete, v5/v6)
Just to the right of Diamond Tooth Arete is a reachy traverse. Start on the large undercling and move right. The top-out is a wee bit sketchy, so be careful! This climb got its' name from the constant drops of water that would smack me on the forehead with each attempt. 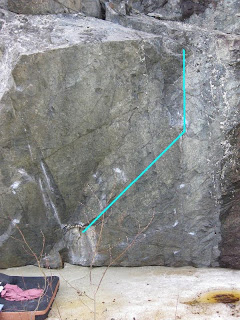 (Waterboarding, v4)
The faces that are farthest down the lowest tier (towards the Ingram Trail) are also starting to dry off. There's some pretty stiff climbs there, that are currently out of my reach. However, I did notice this little arete of sorts. It's hard to say, but I think it's about a v4...lots of slapping around, and an interesting top out. 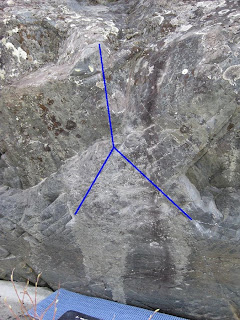 (Hairy back, v4)
Well hopefully you'll be seeing some harder climbs posted in the next week or so.
.
Posted by Pusher at 2:16 PM No comments:

I've been looking at this bad boy for the last few weeks, but moisture and lack of muscle has gotten the best of me. Finally got it! It's found on the same face as the slopey rail problem. Hopefully you can recognize the climb from the photo. The secret to this climb is the good ol'heel hook. Get on it and you'll see what I mean. 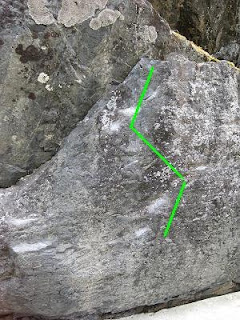 Here's a climb the whole family can enjoy. It's got a little bit of everything, including: crimps, slopers and poor feet...and not too mention a cool SDS. Awesome! It's on one of the middle terraces, close to where the steeper sport climbs are (i.e. Sister's left tooth). You'll know it when you see it. 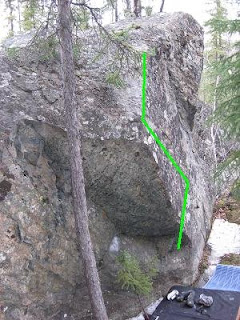 
Good news. The granite faces on the floor of the Ski Club valley floor are starting to dry off. There are some very obvious lines on these overhanging walls. Hopefully I'll be able to post some hard new climbs in the next few days. Stay tuned!
Posted by Pusher at 4:13 PM 1 comment:

Hey Folks. Welcome to the first post of "Bouldering Yellowknife". This blog has been created to make people aware of some great bouldering in Yellowknife, and to get people out and "crush" some of these soon to be ultra classics.

As of now, I've only been developing one area...which I'll get to shortly, but from what I hear, there's quite a bit of climbing in Yellowknife (Gripped Magazine was WRONG!!!).

The area has a few bolts on the steeper faces, but as there isn't much height, it doesn't have a lot of potential for rope climbing. From what I can tell, the boulder problems of this spot haven't been touched. To date, each problem has required a significant amount of cleaning, removal of loose holds, and of course, coming up with a worthy name. 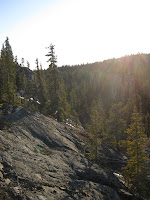 Let us get onto the meat and potatoes. The spot. Correction, THEE SPOT.
It is known as the "Ski Club" climbing area.
The climbing area can be accessed from Niven Street, or a hiking trail off the Ingram Trail (which is accessed by the ski-club). Using the Niven Street directions, entry begins from the "never to be finished" complex of townhouse on Niven Street (see photo below). By walking to the back of the gravel parking lot of this site, and continuing up to the crest of the hill, you can practically see the little valley where all the goodness is to be had. 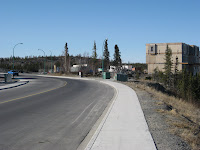 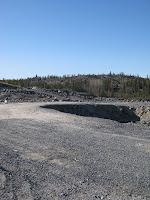 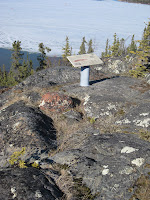 If you follow the series of guide posts that have been placed to mark the hiking trail, you'll eventually come to an education display board that with some text on Old Town (which can be viewed from the look-out over Back Bay) (see photo).

The first few boulder problems are located just down from the educational display. By hiking 10 meters or so, down into the valley and in the direction of the bay, you'll come to a vertical/slightly overhanging granite ledge. On the underside of this ledge are a few doozies. There is a V3 and a V5. 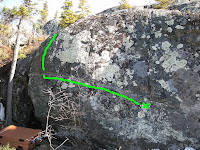 This is a sweet traverse along a thin and sharp seam with rather poor feet. Start at the beginning of the seam and traverse left until you come up to a dihedral at the end of the seam. Climb up the dihedral, while staying off the arete. (Seems to me, v5) 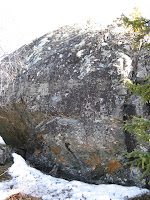 This climb begins on the slopey ledge. From the ledge fire up to a fat pinch, and then to a series of crimpy rails. I expect this climb to get harder as the feet at the start of the climb crumble away. (The bookshelf, v3 )

The next few climbs are located directly down from previously described problems. By walking a treacherous course, almost down to the bottom of the little valley, there are a number of overhanging granite faces. This next spot is a slightly overhanging face, that's about 12ft wide. 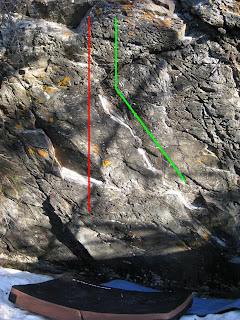 While I've only cleaned two lines, there's potential for a few climbs on this face. The line on the right, starts at a horizontal crimper and moves up along the rail. I've yet to climb it, but I think it's about v6. The line on the left, starts with a left hand on the undercling and a right on the rail. From there fire straight up! The left line goes at v3/v4. 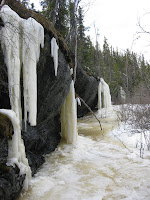 If you move to the right of these two climbs you'll come to a number of higher and steeper overhanging faces.
The first face you come to is relatively small, but has two of the best easy/moderate climbs I've spied yet. There's a slopey rails that starts left and moves right and up. It's a lot harder then it looks, and I think is about v4. Then there's the ultra classic that starts on the rail and fires up to a rail, and then to the top. Awesome! 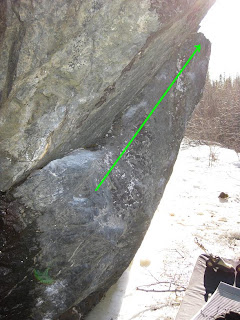 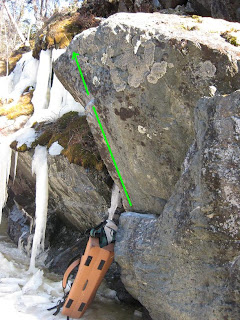 I haven't touched much else on these faces because they're pretty wet. But soon I'm going to spend some time on the steeper stuff. The next, and last boulder that I'm going to introduce in this post is located further up the valley towards the Ingram Trail. It is located on one of the middle terraces, probably 20 meters or so up from the valley floor (a map is my next mission!).
So far I've cleaned two lines on this big fellar. There a sit down start on the right of the boulder that goes at v4 (staying on the face); and then there's a tricky traverse that moves from the left to right, and comes into the v4. I think the traverse and T.O. goes at v5...it's pumpy, and has been spanking me. 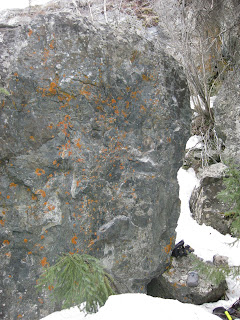 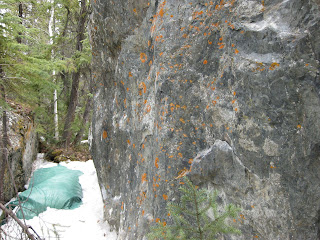 (The v4 starts on the right side of the boulder. Start on the big flake and move up, SDS. The traverse starts on the far right on the two large horns, stay on the face)
Alrighty, that's it for today. If anybody is down for some cleaning and climbing drop me a line at: themaxcody@gmail.com